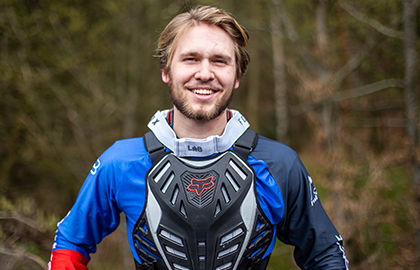 When I think back to my first time on a downhill bike it must have been 10 years ago. My dad introduced me to the sport. He showed me a video of guys jumping big bikes and going down the hill at crazy speed, I was hooked! So, on my next birthday my parents got me, what in my eyes was, the coolest bike around, a freeride Kona Coiler. On our next holiday we went to Portes du Soleil and I just had the best time ever. Over a period of 3 years me and my dad would upgrade the bike a bit and go to some other bikeparks to ride. Then when I was about 15/16 years old I had my first race. The race was held in Belgium so the track wasn’t that long. But racing against the clock and other competitors gave me such a rush, it gave a whole other dimension to riding my bike. Fast forward a couple more years of racing all across Europe, and I came across the IK-PivotCyclesGermany team which was supported by HIBIKE. My buddy Tom Bersselaar was already riding for the team so he helped me get on it as well. My first year with the team was the best season I ever had. It also was my first time riding for a real team, which felt so good. My mom and dad had been my main support over the years before that, but to add some teammates to that support felt really good. This is gonna be my fourth year riding for the Hibike team, which is now called Hibike-Gravity. Last season wasn’t really a good season for me. But I’m ready to turn the tables and to show something in return for all the support I get and got from Hibike.